NY state surpasses 1000 coronavirus deaths - New York state's death toll from the coronavirus outbreak climbed Sunday above 1,000, less than a month after the first known infection in the state.
First coronavirus death in Tasmania - An elderly woman has become the first person to die from coronavirus in Tasmania, as the state introduces tough policing of social gathering restricti ...
Hand sanitiser production guidelines eased - Wineries and boutique distilleries are switching to hand sanitiser production as the federal government tries to shore up supplies during the coronavi ...
Banks move to support landlords, tenants - Australian banks will extend the six-month deferral of loans to 30,000 more businesses to help them cope with the COVID-19 pandemic.
Winner of Gold Coast seat anyone's guess - Who will claim themselves a seat in Queensland Parliament is anyone's guess with just over 1000 votes the difference between two candidates vying for ...
Qld to issue fines for virus rule breaches - It's hoped that restricting public gatherings to just two people will slow the increase of new coronavirus cases in Queensland.
Virus cuts public gatherings to two people - No more than two people will be allowed to meet in public or private and older Australians are being urged to stay at home to slow the spread of coron ...
Eels slash costs during NRL virus shutdown - Parramatta have stood down the majority of their club staff and slashed payroll costs by 75 per cent in response to the NRL season's indefinite suspen ...
Australian companies to get wage subsidies - Businesses will be given wage subsidies to help keep employees on during the coronavirus pandemic.
Woolies offers 'basics box' for vulnerable - Woolworths is stepping up efforts to get food to elderly and other vulnerable people who are stuck at home as coronavirus spreads.

Couple keep their distance, but say 'I do' 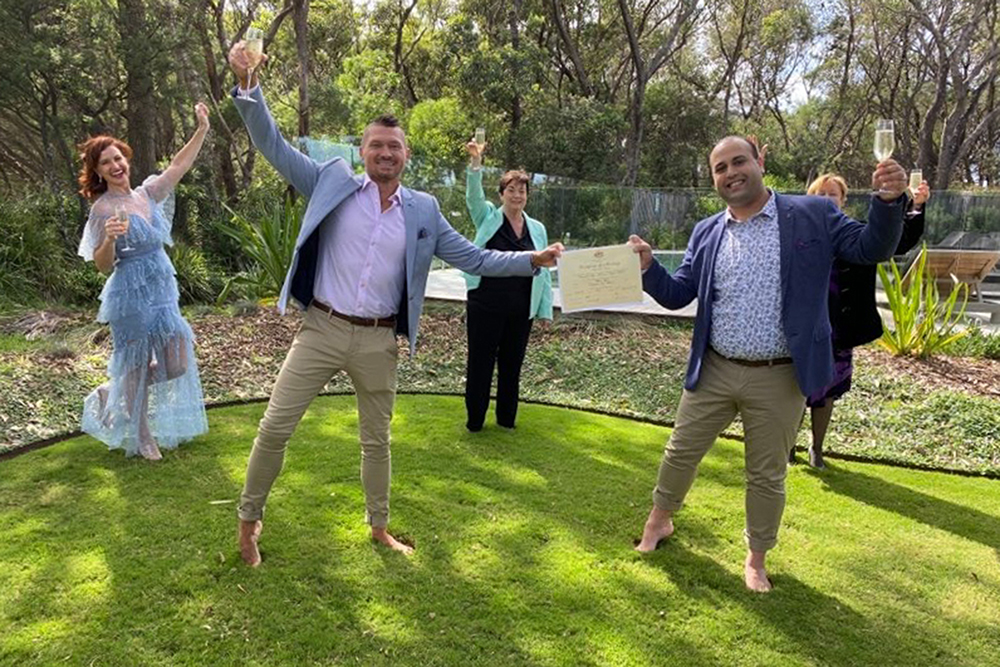 It was eight years in the making but when Alfred and Ben finally wed it was over and done in 20 minutes, and at a distance.

The couple, who married on Thursday, are among many whose wedding plans have been thwarted by nation-wide restrictions designed to curb the spread of coronavirus.

But the pair refused to let COVID-19 have the last laugh. Having intended to the tie the knot on the Gold Coast, within days they found a new venue on the NSW south coast, a new celebrant, and got hitched with a friend standing 1.5 metres away.

"Because the thing has been a whole shemozzle, we're sort of relieved to just get it done," said Ben Wilkinson, 42, of his marriage to Alfred Najjar, 30.

They initially planned to have a big country wedding, but when the logistics of bringing their families - based in regional NSW and Northern Queensland - together became too much, decided to elope to the Gold Coast.

They paid for flights, accommodation in the Hilton Hotel and catering for a small reception lunch.

Then days before the event, their flights were cancelled and a ban on weddings with more than five guests was announced.

The Canberra couple said the way their wedding panned out was "almost comical".

"We had the option of obviously cancelling and waiting for this pandemic to be over with, but we decided we could make it work, despite all of the obstacles," Mr Wilkinson said.

Although they had to wed 1.5m apart from each other, they were metres from the beach, and still celebrated in style.

"There are worse places to have to stay indoors (and) we've got a fully-stocked fridge full of cheeses and alcohol."

Cara Bricknell and Tess Aisthorpe, from Toowoomba in southeast Queensland, have also had to revamp their wedding plans.

Their original plan was to get married at a lakeside venue on May 8, surrounded by family and friends from around the country.

The wedding will go ahead exactly as planned, only they'll marry on May 8 next year instead.

"There might be more hand-washing and less hugging, and our speeches will probably have some virus puns. (But) same venue, same date, same people," Ms Aisthorpe said.

The only people they forgot to tell were their three kids.

"They came home from school on Tuesday and obviously heard from their teachers that weddings had been limited to five people."

"They were worried they wouldn't get to come," Ms Bricknell said.

While they're disappointed the wedding won't go ahead this year, the couple said there was no way they'd marry without their family and friends present.

"We love each other, we're not going anywhere. We want all those special people to share to share that moment with us," Ms Aisthorpe said.