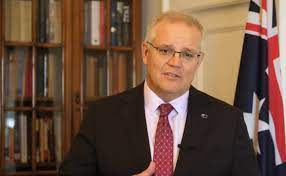 A two-day survey of 817 Australians published by CoreData Research shows 56 per cent of respondents believe the prime minister's handling of the issue has negatively affected their views on his ability to do his job.

The other 44 per cent said it had no effect, or that it had affected their views positively.

In addition, there has been a significant generational shift in stated voting intentions.

The most negative impact is among 'pre-boomers' (76 or older) at 73 per cent, followed by Gen Z (26 or younger), where more than two-thirds (68.8 per cent) of voters say their views have been negatively affected.

Fewer than half of the Baby Boomer generation say their views have been negatively affected by Mr Morrison's performance.

According to the March 27-28 poll, voting intentions have shifted dramatically week-on-week.

Around one in six or 16.4 per cent of respondents said they would vote for the coalition, down from one in four (25.3 per cent) a week earlier.

But the proportion who said they'd vote Labor also declined from a touch over 35 per cent to 27.6 per cent. Those undecided leapt from 4.6 per cent to 34 per cent.

CoreData principal Andrew Inwood said the sample size of the survey was smaller than usual due to time constraints.

However he was happy with the integrity of the data collected, which showed no abnormal variation.