Dreamworld's owner may face prosecution - Dreamworld's owners could be fined $3 million if prosecuted over the 2016 accident that killed four holidaymakers, whose families claim the theme park ...
Drug syndicates using mail to supply ice - A week-long police operation has given authorities a "troubling insight" into the continuing demand for methamphetamine in Australia.
Defence-minded Bulldogs to build on 2019 - Canterbury coach Dean Pay will not wax lyrical about how the Bulldogs finished their NRL campaign last year.
Warriors to revamp NRL attacking game - The players are the same but the approach will be substantially different from a Warriors side facing another uphill battle to reach the NRL playoffs ...
Police Assault In Howard - A man has been charged after allegedly assaulting a police officer at a Howard residence on Friday, February 21. At about 11:50 PM, police were ca ...
CYCLONE ADVICE | Tropical Low Developing In Gulf Of Carpentaria - TROPICAL CYCLONE ADVICE ISSUED AT 10:31 AM EST on Monday 24 February 2020 | Esther is starting to slowly cross the coast between Mornington Island a ...
'Round world' sceptic dies in rocket crash - A Californian man who wanted to fly to the edge of outer space to see if the world is actually round has died after his home-built rocket crashed to e ...
Pro Hart's grave vandalised in Broken Hill - Detectives are searching for whoever vandalised Pro Hart's grave at Broken Hill cemetery.
Sydney pedestrian critical after being hit - An elderly man is fighting for his life after being hit by a car while walking on a western Sydney footpath.
Man charged over WA chisel assault - A man has been charged over the attack of a 73-year-old man in Western Australia after he allegedly struck the victim twice with a chisel. 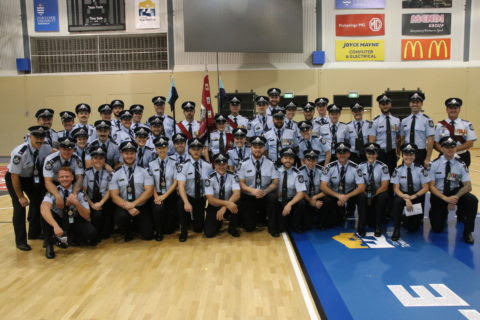 Deputy Commissioner Tracy Linford has welcomed 44 new officers to the Queensland Police Service (QPS) at a graduation ceremony held at the Murray Sports Complex in Townsville.

Following six months of intense training at the QPS Academy, the latest round of recruits will now join the service as First Year Constables.

Deputy Commissioner Linford said the new constables would initially be deployed in the Northern, Central, South Eastern and Brisbane regions.

“The majority of the new officers will be based here in North Queensland and in Central Queensland, to meet the needs of the community,” Deputy Commissioner Linford said.

“It is always an exciting moment to watch new police officially join the service and start their duty to keep Queensland safe and secure.”

“The role of a police officer can be challenging at times, but it is also rewarding. And with the support services provided by the QPS People Capability Command, I am confident the new officers will bring a fresh perspective to the Service.

“I wish every new constable the very best with their future careers in police.”