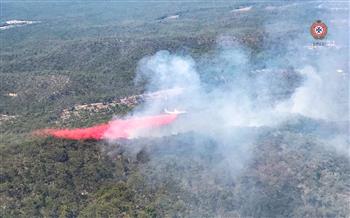 Queensland's new fire-fighting Large Air Tanker (LAT) has been put to the test this week.

A grass fire was burning in the southern Gladstone region on Thursday afternoon, with the tanker flying out to help stop it spreading into a nearby national park.

A Queensland Fire and Emergency Service spokesperson said it took less than 10 minutes for the aircraft to travel from it's base in Bundaberg to the blaze at Lowmead, travelling at 460 kilometres per hour.

"The LAT strategically dropped retardant in front of the fire to prevent it from advancing into the nearby National Park," the spokesperson said.

"Primarily, retardant is used strategically to develop breaks to contain a fire. Retardant works as a barrier by protecting the vegetation it covers from combusting."

As of 7:24am on Friday, seven crews were on route to return to the scene of the slow moving fire, which was not posing a threat to property at that time.