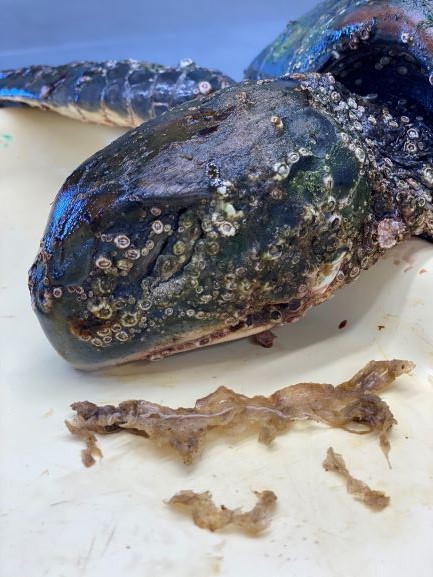 Face masks might protect the public's health but they're harming the environment.

Bundaberg conservationists have been been picking up single-use masks from local waterway with people not disposing of them correctly by putting them in the bin.

While the state requirement to wear face masks indoors ends on Thursday, Burnett River Clean's Glenn Rumsey says the damage has been done with masks already littered throughout mangroves.

"I see a lot of them now that are in the mangroves systems that are coming down from the drains because the drains aren't filtered.

"The problem is that it's just more pressure on the mangroves system and the masks do contain chemicals," Mr Rumsey says.

As part of a study, Fraser Coast-based researcher Dr Kathy Townsend outlined the environmental impacts COVID-19 has been leaving behind.

A disposable mask was found in the stomach of a dead Green sea turtle who washed up on a Sunshine Coast beach.

Mr Rumsey says if face coverings aren't disposed of correctly, they could have serious impacts on Bundaberg's local wildlife.

"When they're floating in mid water they can resemble a jellyfish and other sorts of things where a turtle might mistakenly swallow."

He is asking locals to make sure they put their mask in the bin to keep ecosystems alive.

"I'd be hoping that they would throw their masks and the latex gloves in the bin or just in their car until they get home and find a bin because they're not good when they get into the waterways."

Image: University of the Sunshine Coast