Leaders make election eve pitch to voters - The Liberal and Labor leaders have hit the ground running in the western and southern ends of the country in the final full day of campaigning ahead o ...
Australia confirms second monkeypox case - Australia has recorded its second official case of monkeypox with NSW confirming its first case after Victoria.
Afternoon AFL grand final returns for 2022 - The first AFL grand final in Melbourne in three years will remain in the traditional afternoon timeslot, with fan sentiment again winning out over the ...
Jewellery, phones, bikes found around Bundy - A pouch of jewellery has been handed in to police after being found in Bundaberg South. Authorities are hoping to reunite the items with the rightf ...
Ex-student says she was Dawson's sex slave - A former student taught by Chris Dawson has said she moved into his home days after his wife's disappearance and was treated as a sex slave, housekeep ...
NSW legalises voluntary assisted dying - After decades of campaigning NSW has become the last state in Australia to pass laws allowing people with a terminal illness to voluntarily end their ...
Jobless rate shows our plan is working: PM - Just days out from the federal election the Morrison government's campaign has received a shot in the arm with the unemployment rate falling below fou ...
Satefy warning for drivers, following dozens of fatalities on local roads - We're being urged to be aware of the fatal five, this National Road Safety Week. It comes after more than 100 people have lost their lives on Quee ...
One in three Aussies will vote for the same party as their parents, survey reveals - One in three Aussies will vote for the same political party as their parents, a new survey has revealed. According to new research by Finder, the ...
Morrison bowls over child playing soccer - Scott Morrison has joked the local Devonport football team could use him as a "bulldozer" for their new grandstand after knocking over a chi ... 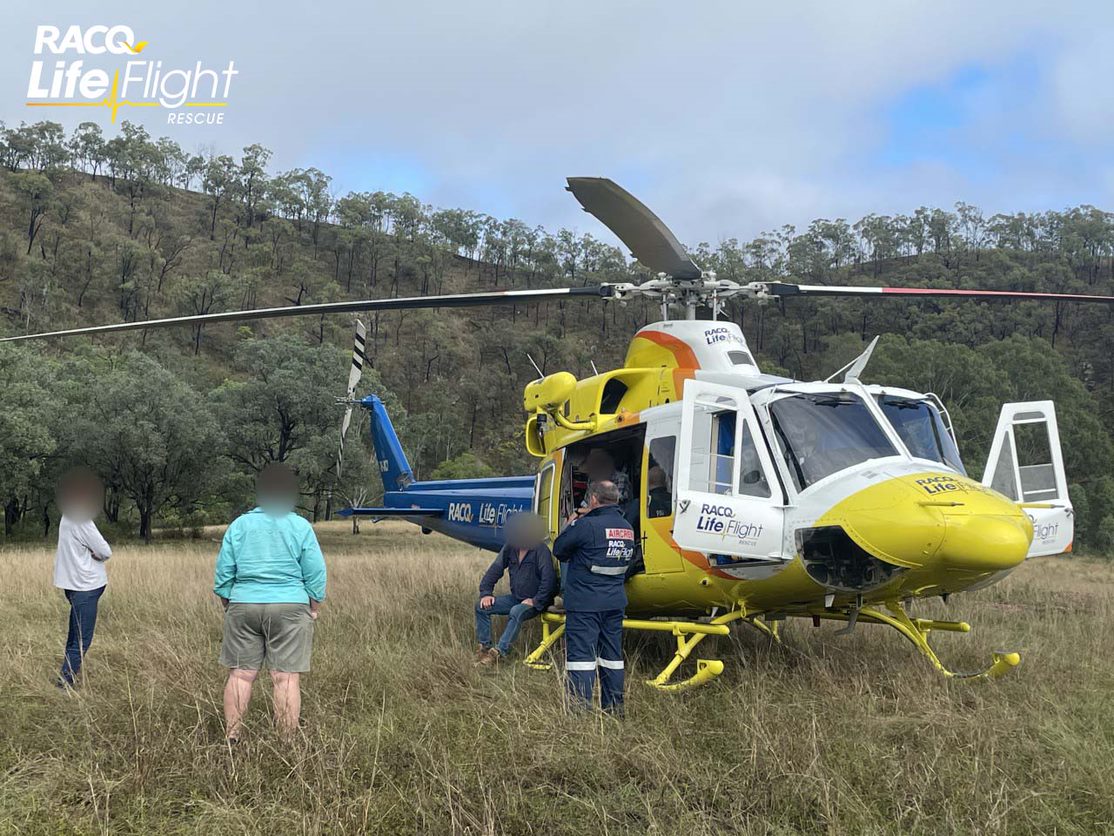 Two men have been choppered to safety, after they spent the night trapped on a rural property in the Wide Bay-Burnett region, when flooding cut off their route home.

The pair - aged in their 50s and 60s - had crossed a creek yesterday (Fri 13th) to move horses and equipment, but by the time they attempted to return, the water had risen dramatically.
They radioed back to their homestead and one of the men's wives called triple zero.
Queensland Ambulance Service (QAS) paramedics couldn't reach the pair by road, because of flooding, so the RACQ LifeFlight Rescue chopper was tasked to the scene yesterday.
With the ongoing weather conditions making flying unsafe in the area, the search and rescue mission was postponed until this morning. (Sat 14th)
The men were forced to stay overnight in a shack on the farming property, with only two cans of baked beans for sustenance.
The rescue chopper was tasked just after 8:30am today by Queensland Police Service (QPS), and landed on the property in the Wide Bay-Burnett region.
The crew flew the men back to their homestead where they were assessed by the QAS Flight Paramedic.
"Both men did the right thing by staying where they were and not trying to cross the flood waters," said RACQ LifeFlight Rescue Aircrew Officer Nathan Minett.
"It's a really great outcome for the men and their families, because situations like this can end in disaster. They were prepared, in that people knew where they were, they had a radio, and of course they had the baked beans."
RACQ LifeFlight Rescue is continuing to support the flood response across Queensland, with crews available 24/7 to assist.
Image:  RACQ LifeFlight Rescue